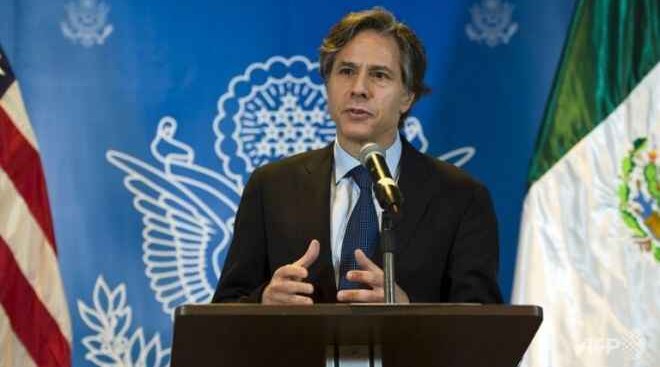 US Secretary of State Antony Blinken began a one-week region tour telling students in Jakarta the US would "defend the rules-based order" and that Indo-Pacific countries should be able to "choose their own path", Qazet.az reports citing DW.

US Secretary of State Antony Blinken called on China to stop "aggressive actions" in the Indo-Pacific region as Washington looks to shore up alliances against Beijing.

Blinken made the comments in Jakarta, Indonesia on Tuesday as he began his tour of Southeast Asia.

Talking about Washington's Indo-Pacific strategy, Blinken said that the US would work with allies and partners to "defend the rules-based order" and countries should have the right to "choose their own path."

"That's why there is so much concern — from Northeast Asia to Southeast Asia and from the Mekong River to the Pacific Islands — about Beijing's aggressive actions," he said during his address at the University of Indonesia.

"Claiming open seas as their own. Distorting open markets through subsidies to its state-run companies. Denying the exports or revoking deals for countries whose policies it does not agree with," he said. "Countries across the region want this behavior to change — we do too."

Blinken will also visit Malaysia and Thailand during his week-long trip. Beijing's growing aggressiveness in the region, mainly in the South China Sea, Hong Kong and against Taiwan seems to be among his main priorities.

"It is also why we have an abiding interest in peace and stability in the Taiwan Strait,'' he added.

China lays claim to almost the entire South China Sea as its own, despite overlapping claims to parts of it by four Southeast Asian states as well as Taiwan.

China has negated the US position as interference from an outside power that could threaten the continent's stability.

Blinken, in his speech, insisted that it was not about a "contest between the US-centric or China-centric region," saying that Washington wanted to avoid conflict in the area.

He also said that the United States and partners would press Myanmar's junta to end violence, free detainees and return to democracy.

As part of its attempts to counter China's growing assertiveness in the Indo-Pacific, Washington will also bolster its military and economic relationships with allies in Asia, Blinken said.

"Threats are evolving, our security approach has to evolve with them. To do that, we will lean on our greatest strength: our alliances and partnerships," he said. "We'll adopt a strategy that more closely weaves together all our instruments of national power, diplomacy, military, intelligence, with those of our allies and partners.

Blinken said that this would entail linking US and Asian defense industries, integrating supply chains and working together on technological innovation.

"It's about reinforcing our strengths so we can keep the peace, as we have done in the region for decades,'' he said.

Blinken also said that the US was dedicated towards  a new regional economic framework which would include more foreign direct investment, "including around trade and the digital economy."