As of Tuesday morning, the lava had covered 103 hectares (1 sq km) and destroyed 166 houses, the EU's Copernicus service estimated 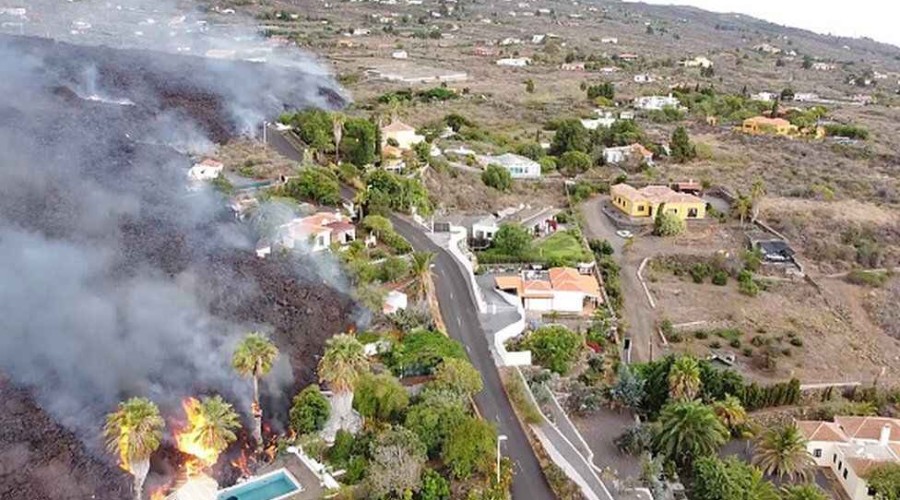 An erupting volcano on La Palma in the Spanish Canary Islands has forced authorities to evacuate another village in the path of lava gushing towards the sea.

The evacuation of El Paso was ordered after lava started spewing from a new crack in the Cumbre Vieja volcano.

More than 6,000 people have fled from lava that has buried hundreds of homes since the eruption began on Sunday.

Local officials said the lava could trigger a chemical reaction that causes explosions and the release of toxic gasses when it reaches the sea.

Marine authorities have established an exclusion zone of two nautical miles (3.7km) at sea, in the area where the lava is heading.

This was done "to prevent onlookers on boats and prevent the gases from affecting people", the president of the island's council, Mariano Hernández, said.

Experts told local media the lava is expected to reach the sea at about 12:00 (11:00 GMT) on Tuesday. Residents have been told to stay away from the area, which has been cordoned off by police.

In the meantime, the lava continues to advance down the volcano's western flank, destroying everything in its path.

As of Tuesday morning, the lava had covered 103 hectares (1 sq km) and destroyed 166 houses, the EU's Copernicus service estimated. A satellite image showed the lava's path down the mountain.

Citing the mayor of El Paso, Sergio Rodríguez, the Cadena SER radio station reported that as many as 300 homes had been destroyed by the lava so far.

So far no casualties have been reported, but footage showed lava overwhelming roads, farms and swimming pools on the island, which is popular with tourists.

There were mandatory evacuation orders for four villages, including El Paso and Los Llanos de Aridane, and temporary shelters have been set up.

One local named Laura told Cadena SER she and her family had no time to prepare for the evacuation.

"My house is not affected, but my neighbours have lost their houses, their small businesses. This is a catastrophe," she said.