Bipin Rawat: India holds funerals for top general and his wife after crash

Former army chief JJ Singh said it was "a safe, proven helicopter", adding that he himself had travelled on it in difficult situations 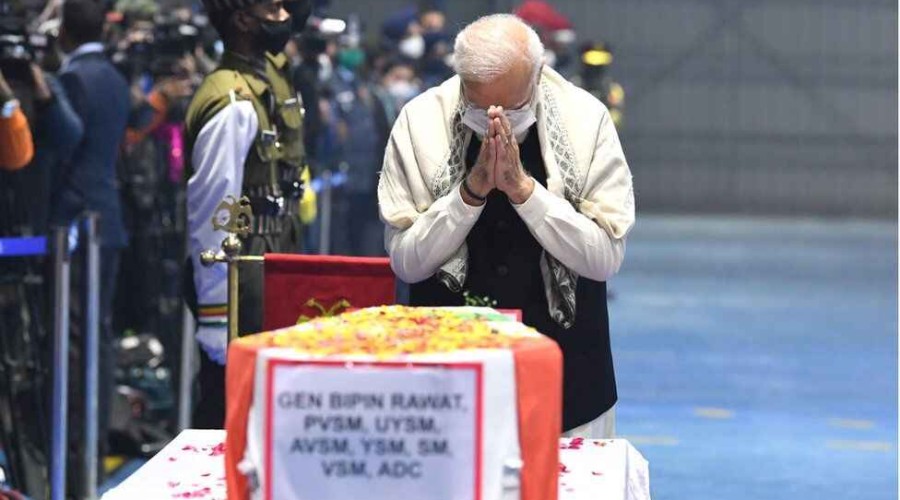 India has held funerals for its top military commander and his wife in the capital Delhi.

Gen Bipin Rawat, his wife Madhulika, and 11 others were killed in a helicopter crash earlier this week.

Prime Minister Narendra Modi, Defence Minister Rajnath Singh and the chiefs of India's army, navy and air force have paid their respects to the victims.

The 13 bodies were flown back to Delhi from southern Tamil Nadu state, where the crash took place.

The Indian air force said it has only been able to identify the bodies of Gen Rawat, Madhulika Rawat and one more victim - Brig LS Lidder - until now.

The other 10 bodies are being kept at a mortuary until the identification process is completed.

The air force has ordered an investigation into the crash, which happened in foggy weather in the hills near Coonoor city.

On Friday, it asked the public to avoid "uninformed speculation" to "respect the dignity of the deceased". Several social media users had tweeted conspiracy theories about the incident.

Gen Rawat, who was born on 16 March 1958 in the northern state of Uttarakhand, had the reputation of being a tough soldier and an inspiring commander.

He was appointed as the country's first chief of defence staff (CDS) in 2019, and previously served as the chief of India's one-million strong army.

The position of CDS had been set up to improve coordination between India's army, navy and air force.

In the months before his death, the general was focusing on modernising the military.

Citing sources, local media have reported that the government had started the process to select Gen Rawat's successor. There are no formal rules for appointments to the post, although retirement age is set at 65 years.

Many reports have named current army chief Gen MM Naravane as the frontrunner. He is set to retire from his current post next April.

The Russian-made Mi-17V5 military helicopter carrying 14 people including Gen Rawat had taken off from an army base in Sulur, and was heading for Wellington town, less than 100km (62 miles) away.

The government said the Air Traffic Control at the Sulur base lost contact with the helicopter seven minutes before it was expected to land.

The sole survivor of the crash was a captain, who is being treated for his injuries in hospital.

Although the Mi-17V5 is among the most sophisticated military transport helicopters, India's ageing air force fleet is often blamed for a high number of crashes.

Former army chief JJ Singh said it was "a safe, proven helicopter", adding that he himself had travelled on it in difficult situations.