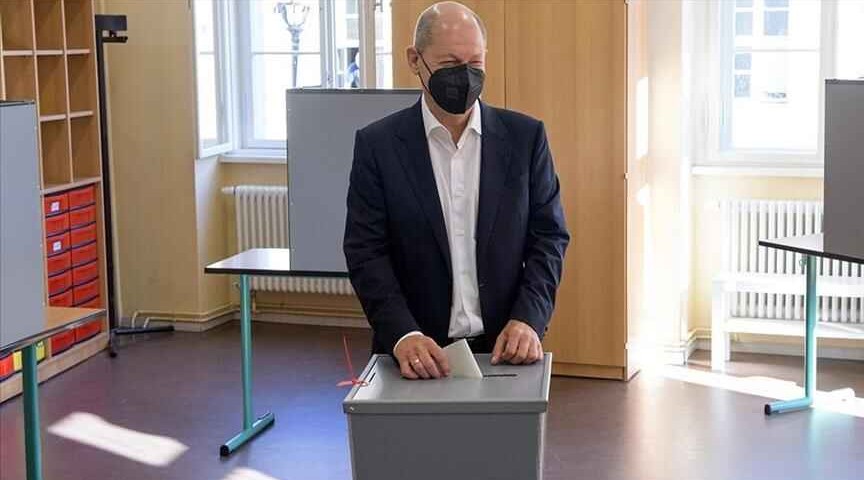 Germans voted Sunday in a very tight election to elect a new parliament and determine who will succeed Merkel as the country’s next chancellor.

Olaf Scholz’s SPD won the election by a narrow margin, gaining 25.7% of the vote and securing 206 seats in the federal parliament, according to the preliminary results announced by the federal election agency.

Conservative chancellor candidate Armin Laschet’s CDU/CSU came in second with 24.1% with 196 seats in the Bundestag. It was the worst election result of the Christian Democrats since 1949.

The Social Democrats have secured a narrow victory in the election but fell short of a parliamentary majority, signaling that the country is heading for a three-way coalition government for the first time since the 1960s.

The environmentalist Greens and the liberal Free Democratic Party (FDP) increased their share of the vote, with both now seen as "kingmakers" to play a key role in forming the country's next coalition government.

The Greens achieved a historic breakthrough, winning 14.8% and becoming the third biggest political group in parliament, with 118 lawmakers. The FDP also managed to increase its vote compared to last elections in 2017, winning 11.5% of the vote and 92 seats in parliament.

The SPD's chancellor candidate Scholz had repeatedly said they would prefer to form a coalition government with the Greens, and he is expected to hold talks with the two parties on a possible three-way government. The Social Democrats and the Greens share many common positions, but they have deep differences with the FDP over a wide range of issues, including minimum wage and tax increases on the wealthy.

Germany's chancellor is elected indirectly, with voters choosing new parliament members who then determine the new chancellor with a vote among themselves.

If the winning party secures a majority in parliament or manages to build a coalition government with an absolute majority, its candidate usually becomes the country's next chancellor.

After 16 years in power, Merkel is quitting active politics but will remain in her post until a new government is formed.