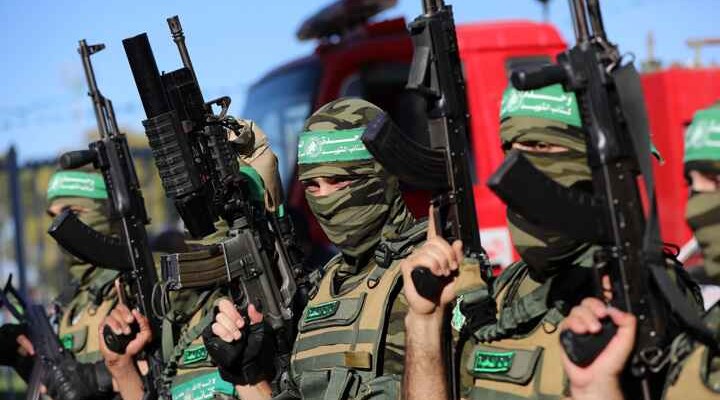 Three members of Hamas died Sunday when shooting erupted at the funeral procession for a member of the Islamist movement in a south Lebanon Palestinian refugee camp, the group said.

Hamas official Raafat al-Murra said militants from the rival Fatah movement “shot at the funeral procession” of a Palestinian killed in a blast Friday at the Burj al-Shemali camp, outside the port city of Tyre.

Six people were wounded, he added.

Hamas and Fatah, the secular party led by Mahmud Abbas, have been at odds since 2007 when the Islamists seized Gaza after a week of deadly clashes.

Talal al-Abed Kassem, an official from security forces affiliated with Fatah in the camp, said that “the shooter is neither a member of the Fatah movement nor the security forces,” Lebanon’s National News Agency reported.

The Lebanese army said later that Palestinian security officials had handed over a Palestinian man accused in the shooting and that an investigation had been opened.

One camp resident told AFP that there was a dispute “when the funeral procession arrived at the camp cemetery and suddenly there was shooting towards the crowd,” but in the chaos it was unclear who was shooting at whom.

Another resident said that “when the shooting started, the funeral procession pulled back… and people fled.” The resident added that Fatah was on alert following the incident.

Hamas late Sunday issued a statement that blamed security forces of the Palestinian Authority, which is led by Abbas. Those forces held “direct responsibility” for what it said was “murder and assassination,” and that PA security forces in Lebanon and leadership in Ramallah were “fully responsible for this crime.”

A Lebanese military source had said that the explosion went off in an ammunition dump kept by Hamas militants alongside food and other stores.

The explosion blackened the walls and shattered windows of a nearby mosque.

“The fire caused damage to property but the impact was limited,” Hamas said.

According to a Palestinian official, one man died of his injuries from the explosion, which also left several people wounded.

Hamas said on Saturday that one of its members, whom it identified as Hamza Shahin, had been killed. It said Shahin was “martyred on a jihadist mission,” but did not elaborate.

On Sunday, mourners had been out on the streets of the Burj al-Shemali camp, shouting pro-Hamas slogans.

Armed elements of both Fatah and Hamas had been deployed before the funeral.

Officially, Lebanon hosts about 192,000 Palestinian refugees, most of whom live in the country’s 12 camps, according to the United Nations Relief and Works Agency (UNRWA).

By longstanding agreement, the Lebanese army does not enter the camps, leaving security inside to Palestinian factions.

Though based in Gaza, Hamas operates branches elsewhere in the Middle East including Lebanon.