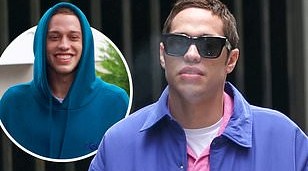 Pete Davidson allegedly 'had a meltdown' on the set of his new series Bupkis on Thursday evening, Qazet.az reports.

The 28-year-old actor, who made a name for himself after seven years on Saturday Night Live, reportedly 'threw two candles through his trailer and damaged a second truck's windshield,' an insider told The U.S. Sun.

'He also threw coffee on the walls and folded a TV in half inside his trailer,' the source added.

Following the incident, he is said to have 'been given some time off to get his s**t together and focus on himself.'

The details remain unclear regarding what instigated his temper, however the star was not seen on set filming on Friday following the outburst.

Kim Kardashian and Pete have 'remained in contact' following their August split.

On Monday, a source told Entertainment Tonightthat the couple 'still keep in touch' after calling it quits on their nine-month relationship.

'It wasn't a bad fallout or breakup, so things are good between them,' the source said.

Earlier this week, Davidson seemed upbeat as he was seen smiling alongside his Oscar-winning co-star Joe Pesci in New York City on Tuesday.