ady Gaga did not want to risk her life performing at U.S. President Joe Biden's inauguration in January 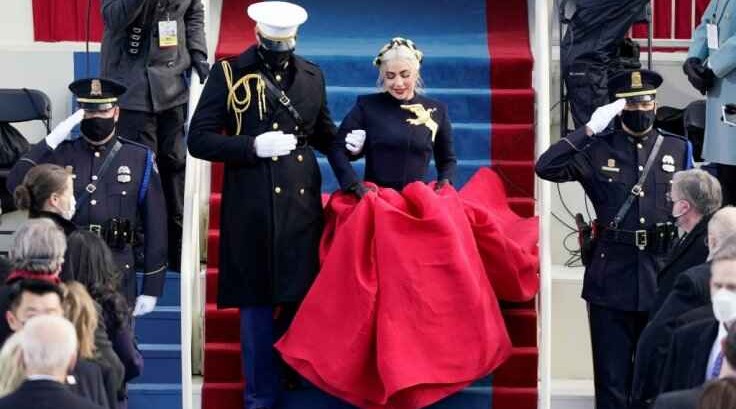 Lady Gaga did not want to risk her life performing at U.S. President Joe Biden's inauguration in January so she decided to wear a bulletproof dress.

The singer made this confession during an interview with British Vogue. She said that no one knew it then that the Schiaparelli Haute Couture look she wore for the occasion was "bulletproof."

"This is one of my favorite things I've ever worn. I wore this Schiaparelli design for the inauguration, and nobody knows this, but this is a bulletproof dress," the multi-awarded singer revealed as she looked back on her fashion evolution in a video shared by the magazine on Monday.

The "Chromatica" hitmaker did not go into details of what made the stunning red and navy dress she wore to the inauguration ironclad. It is unclear if she wore a bulletproof vest underneath or Schiaparelli creative director Daniel Roseberry customised it as such. The ensemble features a ballgown skirt and a structured fitted jacket.

Lady Gaga also fondly looked back at the large golden dove brooch she accesorised her dress with. She said it was "the right piece" to wear as a symbol of peace.

"And I knew, Schiaparelli being an Italian fashion house, it was something that I really, really wanted to do for my heritage as an Italian-American woman that would be singing for President 45 to be leaving and to invite President 46 into office," she added.

The "House of Gucci" star also opened up about her ironclad dress in her interview for the magazine for its December 2021 issue. She said, "Singing in a Schiaparelli bulletproof dress. I don't know if people know this about me, but if I weren't who I am today, I would have been a combat journalist. That was one of my dreams." She revealed that when she was at the Capitol a day before the inauguration she was "walking around and looking for evidence of the insurrection."

As for singing the National Anthem at U.S. President Joe Biden's inauguration, Lady Gaga considers it one of her career highlights. She said it was "one of the proudest days" of her life as she admitted, "Like many people in America, I felt a deep fear when Trump was president, and ushering 45 out and 46 in is something I'll be able to tell my children all about."