Myanmar streets are emptied by 'silent strike' against military rule 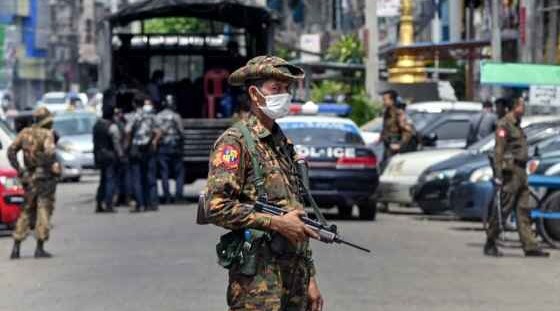 Protesters in Myanmar closed businesses and stayed off the streets on Friday in a “silent strike” against rule by the military and its ousting of the Southeast Asian country’s democratically elected government in a February coup.

Photos published by Myanmar media showed deserted streets and markets in towns across the country, while protesters in the northern city of Shwebo wore black clothes and marched in silence.

“Silence is the loudest shout. We want our rights back. We want revolution. We express sadness for our fallen heroes,” she said.

Myanmar was plunged into crisis when the military overthrew leader Aung San Suu Kyi and her government on Feb. 1, setting off daily protests in towns and cities and fighting in borderlands between the military and ethnic minority insurgents.

Nobel laureate Suu Kyi, 76, is facing various charges and was sentenced to four years in prison on Monday on the first of them — incitement and breaching coronavirus regulations — drawing international condemnation of what critics described as a “sham trial.”

The junta chief later reduced her sentence by two years on “grounds of humanity,” but the charges she still faces could see her jailed for many years.

Minn Khant Kyaw Linn, a student activist from the General Strikes Collaboration Body protest group, said participation in the “silent strike” on Friday had been widespread.

“You can see how much people hate the junta,” he said.

Junta forces seeking to crush opposition have killed more than 1,300 people, according to the Assistance Association for Political Prisoners monitoring group.

Earlier this week, there were reports that Myanmar soldiers had rounded up and killed 11 people in the northwestern region of Sagaing.

The soldiers were accused of shooting the people and setting fire to their bodies. Charred remains were discovered in a village.

Video footage purporting to show the burned bodies was circulated on social media and images were published by some media including the Myanmar Now news portal.

State Department spokesperson Ned Price said on Thursday that the United States was “outraged by credible and sickening reports that the Burmese military bound 11 villagers, including children, in northwest Burma and burned them alive.”

Price repeated Washington’s call for the military to end the use of violence and to release those unjustly detained since the coup.

The remains were found in a village in Sagaing, an area that has seen fierce fighting between security forces and militia set up by opponents of military rule, said residents, who said some of the victims were still alive when burned.