President: A plan of hostilities had been developed a long time ago, of course

"A plan of hostilities in a country that was in a state of war, albeit a frozen one, had been developed for all occasions a long time ago, of course," said President Ilham Aliyev 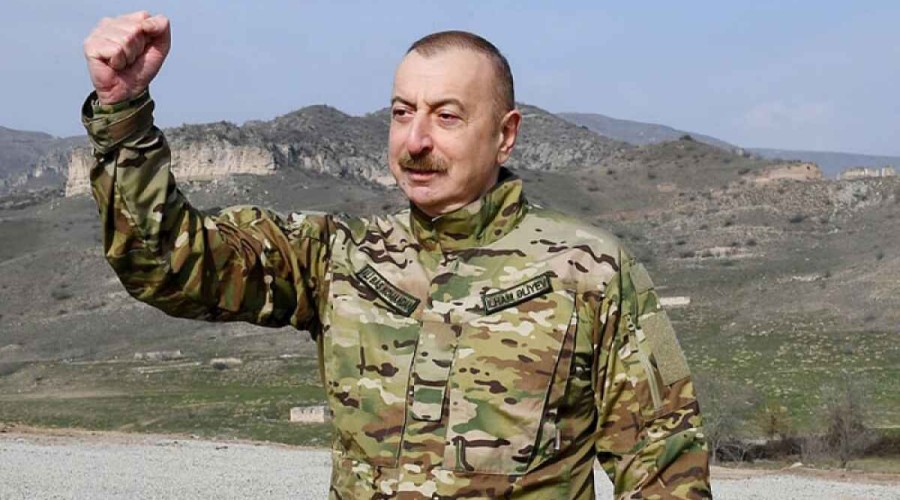 "A plan of hostilities in a country that was in a state of war, albeit a frozen one, had been developed for all occasions a long time ago, of course," said President Ilham Aliyev while answering question of editor-in-chief of Russian influential “Natsionalnaya oborona” magazine, well-known military expert Igor Korotchenko on "How was the plan for the counter-offensive operation, which was called the “Iron Fist”, developed? Why was this name adopted? And who took part in the preparation, under your leadership, of the concept and plan of the counter-offensive operation?", Qazet.az reports.

"Naturally, taking into account new realities, taking into account the new opportunities, including the technological capabilities of Azerbaijan, changes were occasionally introduced to this plan, and each time these changes were approved by me. This is natural. I also know that the Armenian side also had a plan of action in case of war. Essentially, they started implementing it on 27 September. Thus, the basis for our actions during the war was developed long before the outbreak of hostilities last year, of course, but during the course of military operations we made changes to it. This was due, first of all, to the fact that over the years it was impossible to avoid even a small leak of information. We assumed that the enemy was generally aware of our intended actions. The combat zone is quite limited in size, and any military specialist can determine where the main operations will take place, of course. Therefore, we made adjustments to the combat plan one might say on a daily basis. Every day I held meetings with the leadership of the Ministry of Defense, the State Border Service, the Ministry of Internal Affairs, the State Security Service and the Foreign Intelligence Service. In these meetings, we summed up the results of the day, identified shortcomings, and also planned and approved actions for the next day. Therefore, there was such hard and daily work, so to speak. In many cases – the course hostilities is already known now – our actions and operations proved to be a major surprise for the enemy.

As for the name of the operation, it did not have any name at the beginning of hostilities, of course. I used the expression “Iron Fist” several times during my appeals to the Azerbaijani people, when I reported on the liberated cities and villages. I used this term several times and said that our “Iron Fist” would smash the enemy's head if they do not voluntarily leave all the occupied territories. And, as it were, this term was received well in our society, and then I decided to formalize it, if I may say so, and give the operation this name. But again, this happened during the course of military operations," noted the head of state.